The new 2020 range of MacBooks is the first to be built with Apple’s groundbreaking processor, the M1. Apple says the ARM chip delivers the peak performance of a PC laptop with just 20% of the power consumption, as well as the world’s fastest integrated graphics in a personal computer.

Those are some impressive stats that leave tech fans with a fresh challenge: deciding which to buy! So which should you choose: the MacBook Air or the MacBook Pro? 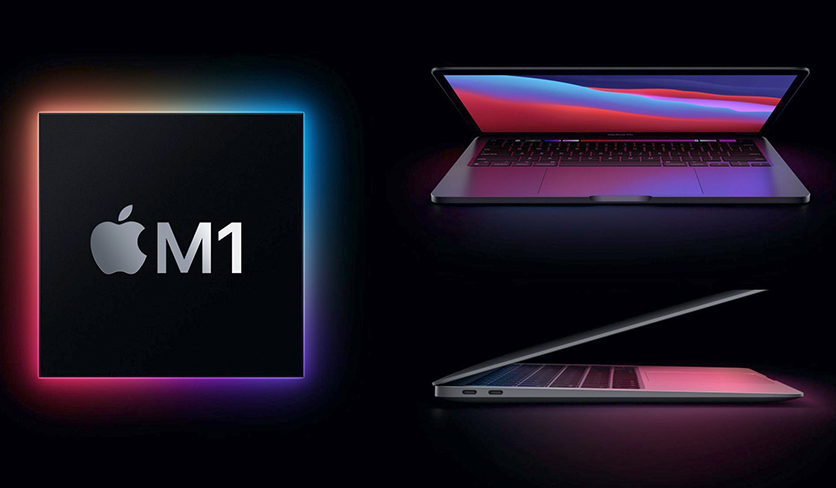 Both new products are head and shoulders above their competitors and much better than previous iterations, with the same sleek design and minimalism that’s made Apple’s MacBooks so iconic. And this time, both the MacBook Pro and the MacBook Air promise awesome performance without draining your battery.

In this article, we’re going to compare both models to help you choose the right Mac. We’ll take a closer look at the price, specifications, performance, design, and keyboard options to outline which Mac you should buy.

Of the two MacBooks, the MacBook Air is the least expensive, starting at $999 for a 7-core GPU M1 processor and 256GB of storage space. The price goes up to $1249 if you want to upgrade to the more powerful 8-core GPU M1 with 512GB of storage.

The MacBook Pro starts at $1299 and comes with an 8-core M1 processor as standard and 256 of storage. 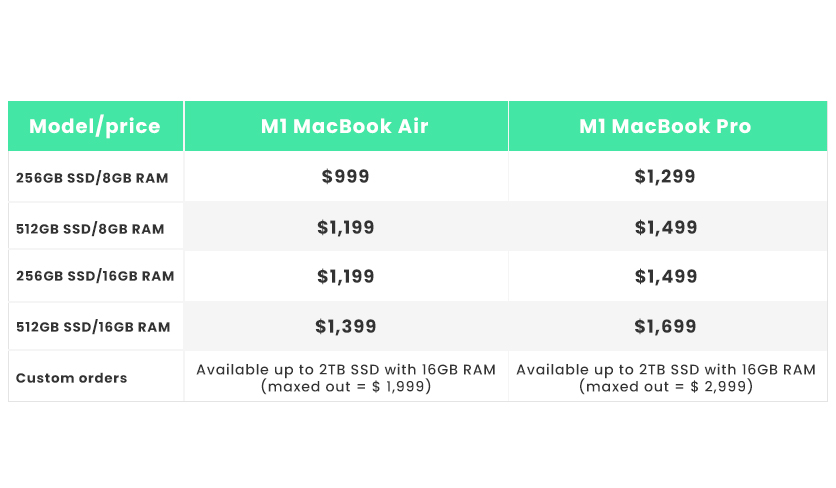 So what’s the difference between the M1 with 7 cores and the M1 with 8 cores? Well, we don’t expect it to be anything too dramatic. But if you’re looking for extra processing power for gaming or 4K-video work, we’d recommend the MacBook Pro. After all, it’s only $50 more expensive than the eight-core GPU MacBook Air.

Maxed-out versions of both laptops will run to about a thousand dollars more than the base price if you want 16GB of RAM and 2TB of storage.

As outlined above, both laptops feature the new Apple M1 processor. The entry-level M1 MacBook Air has a built-in 7-core GPU, but the high-end MacBook Air and the every MacBook Pro has an 8-core GPU.

The memory storage space and RAM of both laptops are configurable; you can choose how high you want to go at the time of purchase. The MacBook Pro and Air both max out at 16GB of unified memory and 2TB of storage.

Both laptops have a 13.3-inch LED-backlit display with IPS technology, with your favorite movies and media tasks illuminated by Apple’s Wide Color (P3) and True Tone technology. Having said that, the screen brightness levels differ: The MacBook Air offers an upper limit of 400 nits brightness, while the MacBook Pro maxes out at 500 nits. 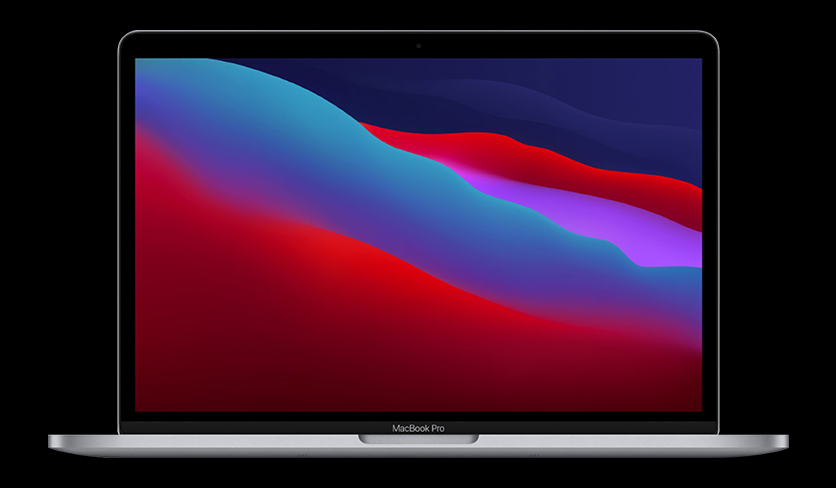 If portability is a big priority for you, there’s a slight weight difference between the two new Macs that you might want to consider. True to its name, the MacBook Air weighs 2.8 pounds (1.29 kg). The MacBook Pro weighs a little more: 3.0 pounds (1.4 kg).

Let’s get one thing straight. Both of these laptops are powerhouses with lighting fast loading times and insane battery life.

And it gets better. Thanks to the new M1, the battery lasts twice as long. A single charge can support 17 hours of web browsing or 20 hours of video playback. 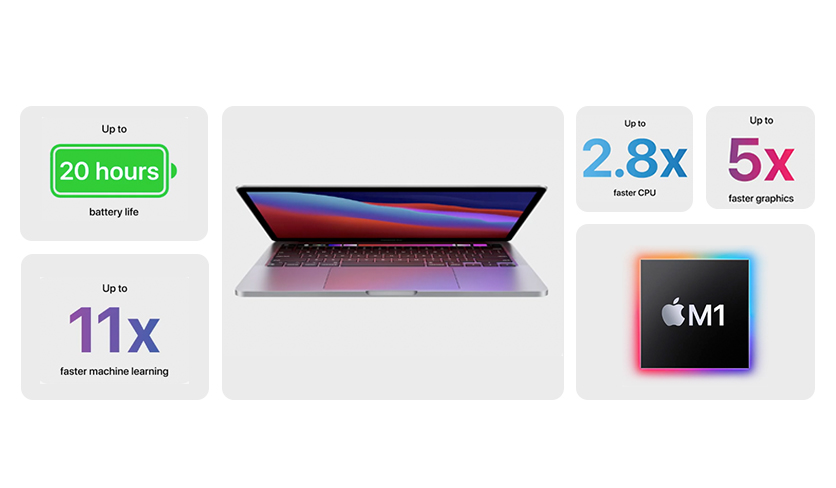 But there will still come a time when you need to charge up the battery. When that time comes, consider using a rapid multiple device charger such as the UGREEN 65W GaN Charger. It’ll enable you to conveniently charge all of your Apple devices at once. 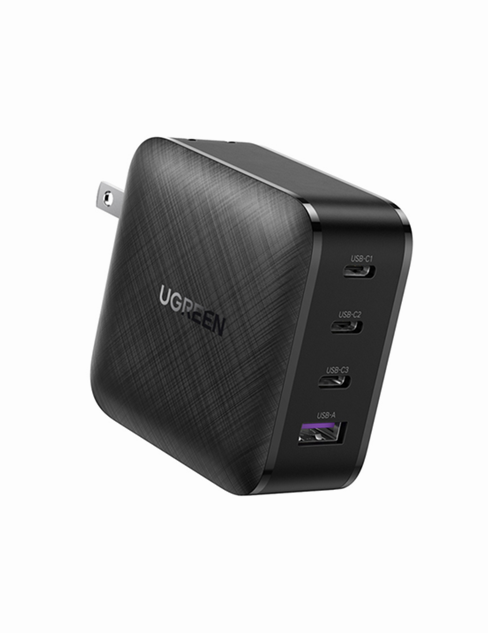 The MacBook Air also, quite incredibly, doesn’t come with a fan built-in – which shows you how confident Apple is with the new M1 and its thermal efficiency. 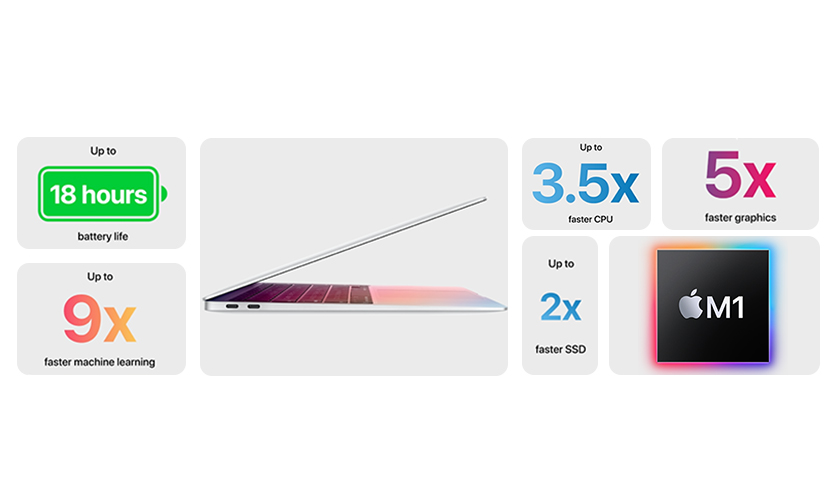 In all, although the MacBook Pro might be the more sophisticated of the two laptops, the MacBook Air still offers incredible performance and value compared to its competitors in the Windows market.

When it comes to the design of the two options, the difference between the MacBook Air and MacBook Pro is significant. Having said that, both models are essentially identical to the previous iterations. Most of the new features are below the surface.

The MacBook Air continues with its sleek wedge-shaped design. The MacBook Pro goes for the same slab-style that has long been popular. Interestingly, the MacBook Air is slightly thicker than the Pro. But its slender wedge makes it seem lighter and thinner. Looks can be deceiving!

Touch ID is featured on both machines. This takes the place of the traditional function keys.

Both MacBooks come with two USB 4 ports that support charging, DisplayPort, Thunderbolt 3, and USB3.1 connectivity. They both also have a 3.5mm headphone jack if you need to work in peace or not disturb those around you.

If you need more ports and card readers to increase your productivity, you can always add a device such as the USB-C Hub for MacBook, which has SD and TF card ports, USB ports, and a port to charge your phone. 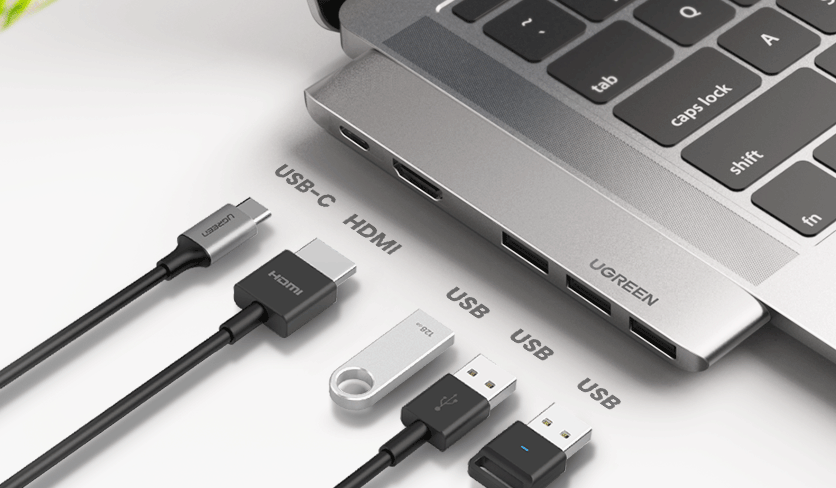 The MacBook Air and the MacBook Pro also feature a 720p FaceTime HD camera, which will make remote video conferences a breeze.

Apple’s Magic Keyboard is featured on both Mac products, with backlit keys and a Force Touch trackpad. A Touch ID sensor comes as standard on the MacBook Air and MacBook Pro. You can use it to log in with ease.

However, only the Pro is equipped with the Touch Bar, which is like the traditional function key bar, but adapts and changes automatically depending on the task and app you’re using. 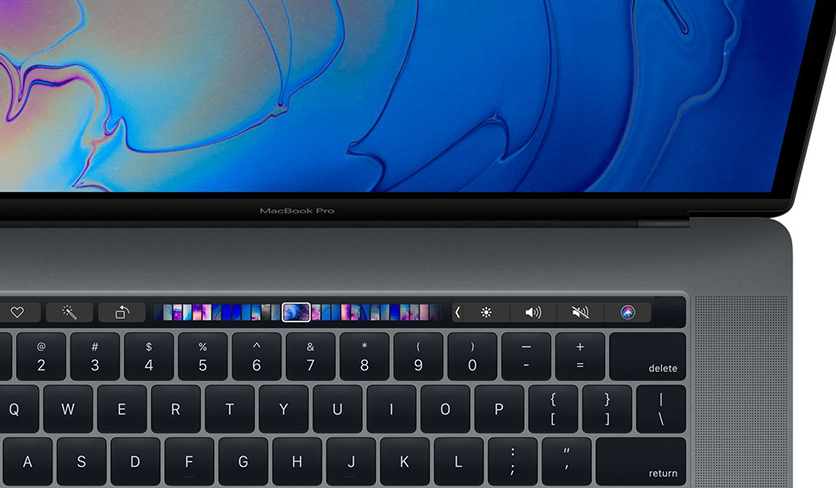 To help you work efficiently and comfortably, we recommend investing in the UGREEN XKit hub-stand to simplify your office space and keep all your gadgets connected. With its ergonomic design, you’ll be able to adjust the angle of your MacBook while you work and prevent sore wrists and neck-ache. And, with multiple port options, you can switch your display and move your media around with ease.

There’s a limited super early bird 50% OFF discount On Indiegogo, grab it now!

If you’re thinking of buying a new MacBook, you need to consider what you’re going to use it for and what you’re willing to pay.

Is it going to be a portable office for emails and internet browsing on the go, or are you looking for a high-performing computer than can handle intensive media editing and high-spec games?

To be honest, even the entry-level MacBook Air is a lot more powerful than comparable non-Apple products on the market. It has more than enough computing power for everyday work and leisure tasks, along with incredible battery life.

But if graphics and performance are key, you should go for the MacBook Pro. But as both devices share the same M1 processor, the difference might be hard to spot. The Pro does also have the upper hand in terms of battery life, screen brightness, and sound system quality.

It’s a tough choice, that’s for sure. And of course, your budget will play a big role. Let us know in the comments which MacBook are you thinking of getting!

No matter which MacBook you purchase, we predict that it’ll become the creative center of your work and play.