Wireless gaming has allowed people to connect with each other from all over the world. But everyone knows that video games are always better when you can see your friends’ tears in person. But, are you getting the most out of your gaming parties? In this article, we will recommend a few ways you could improve your gaming parties with your friends.

There are two main options for your internet connection: WiFi and Ethernet. WiFi is obviously the most common type that people use around their homes. It is convenient because you can move around your home and stay productive.

One of the major issues with using WiFi for the main source of the connection is bandwidth limitation. Everyone in the house is going to need to go through the same WiFi connection, including people who are in the house but not playing. However, a lot of popular games don’t actually require much bandwidth, like League of Legends.

Even if you have plenty of bandwidth for everyone in the house, you still might not want to use WiFi. A bigger factor in your performance might be your latency. Latency is the time it takes for your commands to be transferred from your computer to the hosting server. Latency is often called your ping and measured in milliseconds. If your ping is under 100 ms, you are probably alright. However, if your ping is over 500 ms the game might feel unplayable.

But, if you are having a lot of people over, you might run into the problem of not being easy for everyone into the router. If you have this problem, an Ethernet switch can be a great solution. You can get one long Ethernet cable to connect to the router and several smaller cables that all plug into the switch. 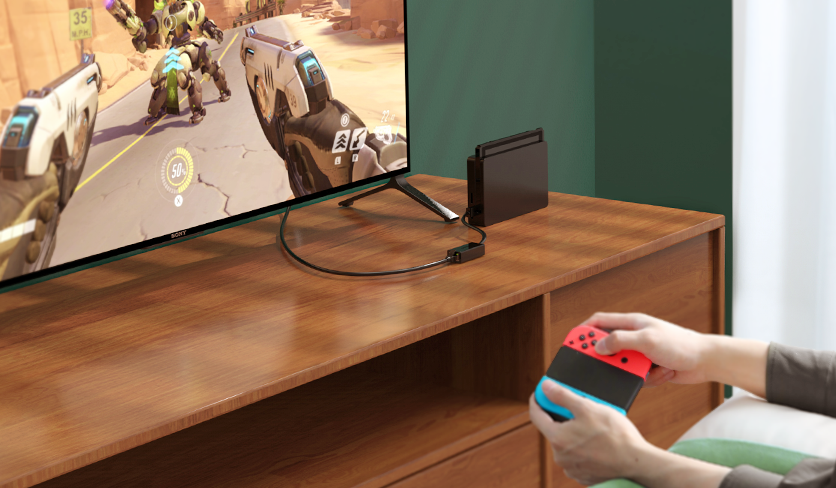 If you need to refresher, we have an article about everything you need to know about Ethernet cables.

While the Ethernet switch is a great solution for decreasing latency and improving download and upload speeds, it can also run hot if you are not careful. If you only have people over, you can just buy an Ethernet switch with an aluminum body. Aluminum is great because it will provide a natural heatsink. If you regularly have gaming parties you might want a switch with a more active heat sink. We also have an article about why most electronics are made of aluminum, you can check it out!

Regardless of which Ethernet switch you choose, you are going to want to elevate it off the ground. It might feel natural to tuck it away somewhere, but this will affect the switch’s ability to ventilate itself.

Both consoles and computers can be great for a LAN party. Whether you want to make your own weekend gaming house, or you want to hold a local tournament, any system can be great. However, the considerations for your party might be slightly different.

In the old days, you would have to bring your system with you to your friend’s house and bring a monitor. That was a hassle and if you’re still doing that, you really don’t have to. Cloud gaming has made it possible to just bring a tablet with you and set up your party that way. Whether you are using XBOX Game Pass, Play Station Now, or Google Stadia, in the near future you will pretty much be able to have a game party anywhere.

Still, to stream games effectively you need a pretty strong internet connection. A good solution is to get a USB-C Hub for your tablet that has an Ethernet port. This will ensure you have a strong enough connection to avoid lag or low performance.

When you are setting up a PC party, it is good to have extras components on hand. Laptops are great if they are powerful enough to game with, but they generally don’t have Ethernet ports. Having some extra mice, ethernet adapters, and Ethernet cables on hand can be helpful, just in case someone forgets their stuff at home.

You are going to also want to have some tables arranged between two or three outlets. This could very well be the most difficult thing to set up. Folding tables are shockingly expensive sense they are just metal and plastic put together with a couple of hinges. Still, you can check out your local thrift store.

Daisy-chaining power cables isn’t dangerous in every situation. However, gaming systems generally draw a lot of power and so daisy chaining at a LAN party is a bad idea. While most powerstrips are required to have safety fail-safes, why take a chance with your devices?

You should have a general understanding of your breakers and which breakers control a specific area of the house. This will not only help after you trip your breaker because you overloaded your powerstrips, but you can also use this information preemptively. A circuit has a maximum output, with this in mind you can choose to set up a part in an area where you can easily use two breakers at the same time and turn off what you don’t need.

Something we talked about in an earlier article was the rise of cloud gaming and how this might upset the current gaming environment. While the technology is still in its infancy, it is ready to change the way we game. Instead of the monitor from Goodwill we mentioned earlier, you can just use your tablet to game.

When game streaming services reach a critical amount of users and the 5G broadband network is sufficiently developed, anywhere could serve as a gaming party location. That would be a pretty spectacular future.

Who Is Bringing the Food?

We obviously cannot forget the most important part. Are you bring food with you or ordering delivery? We cannot help you answer this question but don’t forget to think about it. It can make the difference between a great LAN party and a light gaming session.

How to Upgrade Your Video Game Party