VGA is short for Video Graphics Array. It is a standard for video output that uses analog signals rather than digital signals. VGA connectors have 15 pins that each contribute to how the colors blend on the screen.

The VGA standard was first introduced in 1987. IBM originally designed the standard for 640×480 displays. VGA connections use a 16 color system. This was revolutionary at the time and replaced the S-Video. 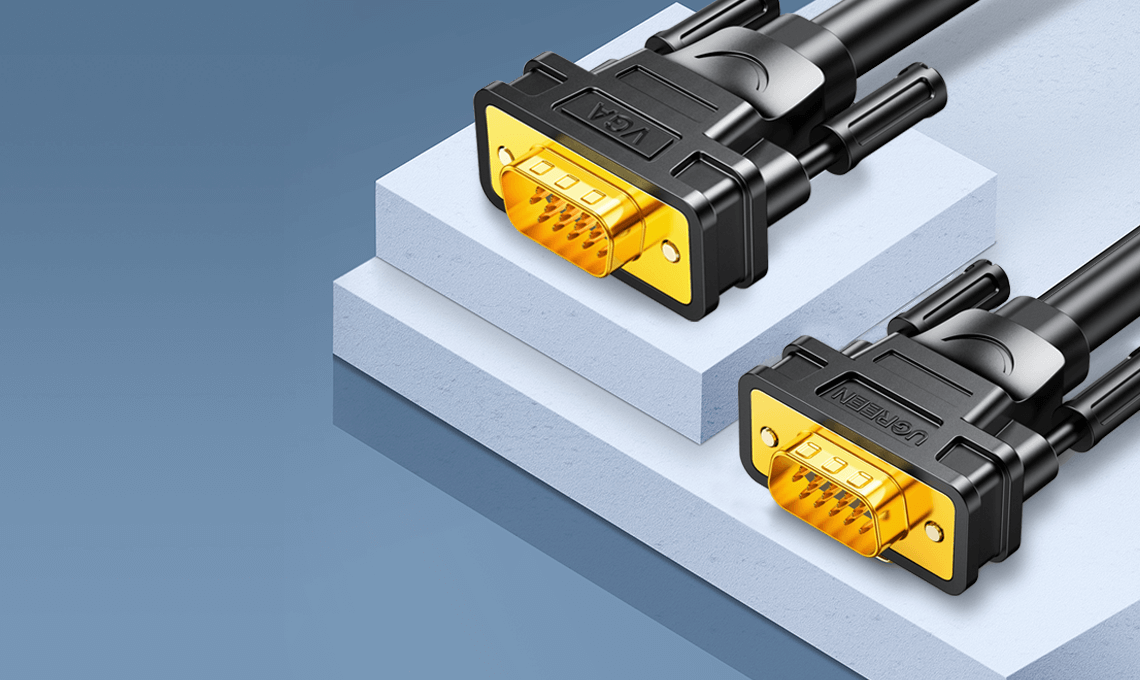 Keep reading if you want to learn: 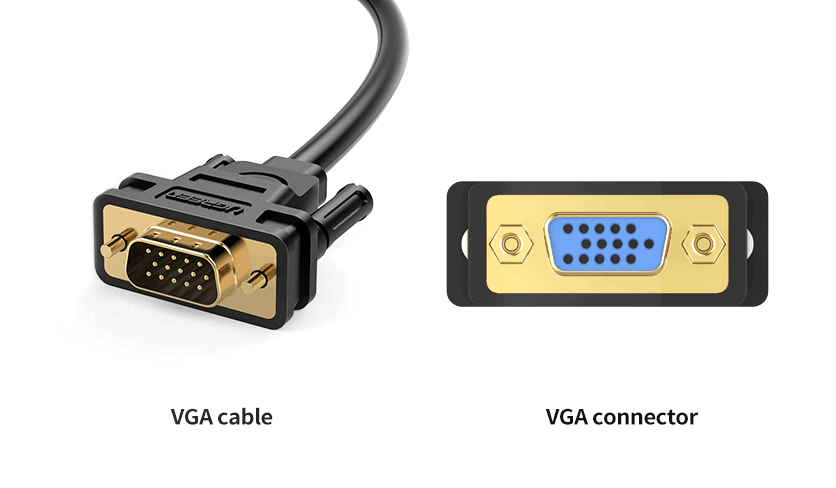 One major issue with this design is that there are multiple possible failure points. If the copper pin is bent, the trapezoid shell is bent, or a screw breaks it would make the connector difficult or impossible to use.

Why Do VGA Connectors Have Tiny Pins?

The defining feature of VGA connectors is the large number of pins that plug into the holes in the port. The traditional VGA ports have 15 jacks for 15 pins.

The first three pins are responsible for red, green, and blue. The system uses those three colors to create all the other colors on the display. The system can also change the intensity of the colors. The three colors plus intensity give the output four variables. The VGA connection can combine each variable together and that is why it is called a 16-color scheme. Four times four is 16. 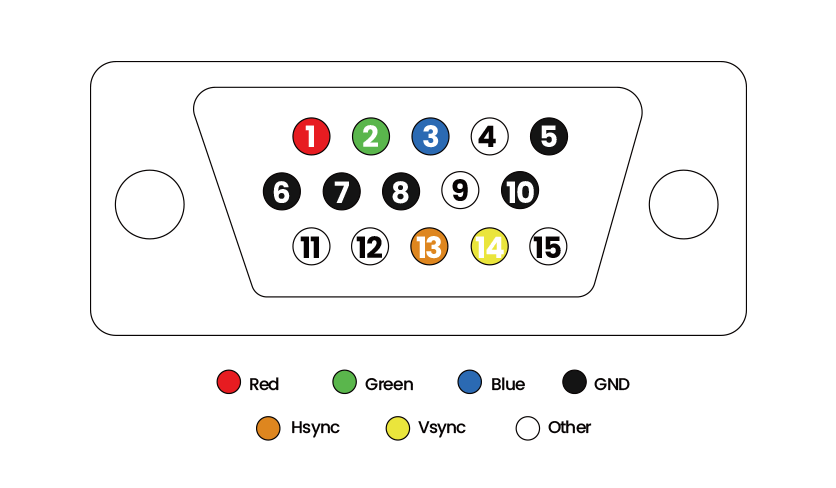 Pins 5, 6, 7, 8, and 10 are all grounding pins, which prevent signal interference. Any excess electricity will be sent through these pins. Without these grounding pins, a VGA cable would provide an inconsistent picture.

Pins 13 and 14 control the horizontal and vertical synchronization respectively. You probably aren’t aware of this, VGA connections don’t send a signal. They send two. The connection sends a vertical and a horizontal picture and then blends the two together.  These segments are then synchronized to make sure they match and that is what we see.

Pins 4, 9, 11, 12, and 15 are no longer functional or have a limited function.  These pins were originally meant to detect what type of monitor was being used. However, a transition started in the late 1990s from analog signal broadcasting to digital. During this transition, the way the cables recognized resolution changed. So, these pins became redundant.

What Kind of Variations of the VGA Ports Are There?

It’s possible that you have come across a lot of similarly named ports: VGA, SVGA, WXGA, etc. Why are there so many similar names? These names represent the different resolutions of a display. Despite IBM’s many different names for the ports, most people refer to the connections collectively as VGA.

If you are old enough, you might remember that TVs used to have rabbit ear antennas. These TVs used analog signals. In 2009, the FCC announced that TV broadcasts would only use digital signals going forward. If you had an older TV in 2009, it would have stopped working unless you purchased an adapter to pick up digital signals.

While this event was highly publicized in the news, the transition from analog to digital started much earlier.  This transition is important because VGA cables transmit in analog. This means your computer’s digital data needs to be converted to analog to be transmitted through VGA cables.

The resolution of your VGA connection is determined by your computer’s video card. Currently, the highest resolution offered through VGA ports is 2K. In theory, a VGA port could support higher resolutions. But, remember that the computer needs to convert the digital signal to analog in order to be transmitted through a VGA cable. This would use up a lot of the computer’s processing ability.

This is why VGA connections aren’t good for high resolutions. Most video cards that support VGA only offer 1080p resolution. The cable itself doesn’t affect the resolution, but older devices won’t support higher resolutions. The exact resolution of VGA ports varies depending on the computer.

What Is the Difference Between HDMI and VGA?

Unlike VGA, HDMI uses digital signals. This means that HDMI is able to transfer its data more efficiently than VGA. Since the computer’s data is digital, it doesn’t take extra processing power to transfer it through an HDMI cable.

HDMI 2.1 supports higher resolutions, such as 8K at 120hz. While VGA does not have a bandwidth limit, it is limited by the source of the video and how the video is converted to an analog signal. HDMI cables also can be longer than VGA cables as the digital signal does not degrade over distances. 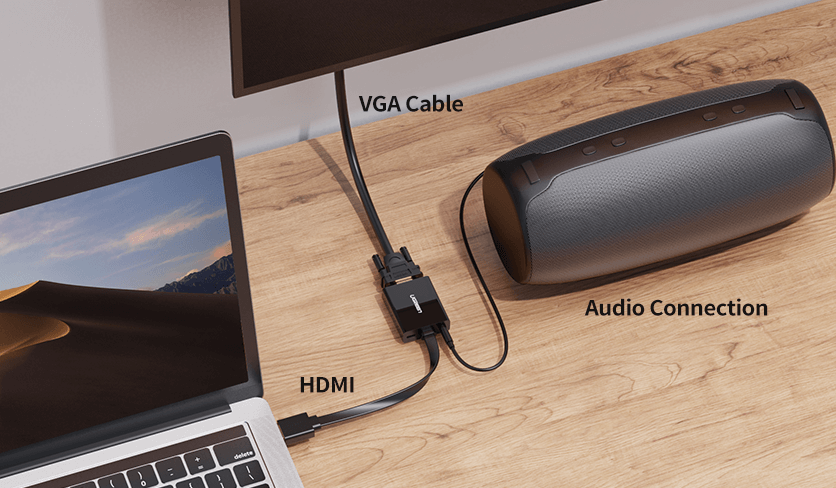 Due to VGA’s limitations, we wouldn’t recommend them as primary displays. Most modern devices don’t have VGA ports. However, if you have an old monitor that has a VGA you might want to use it as a second display. This could be useful for taking notes on a second screen or watching for changes in the stock market.

If you have a VGA monitor and you think you could still use it, you might consider getting an HDMI to VGA converter. This will allow you to utilize an older display with a newer device. Most converters also feature a 3.5mm audio jack due to the fact that VGA cables don’t transmit audio.

DVI connectors offer both analog and digital options. This makes it more versatile. However, despite DVI being meant to replace VGA most companies have stopped supporting DVI connections. Since the FCC was already moving away from analog signals, the DVI’s analog functionality was not particularly useful. 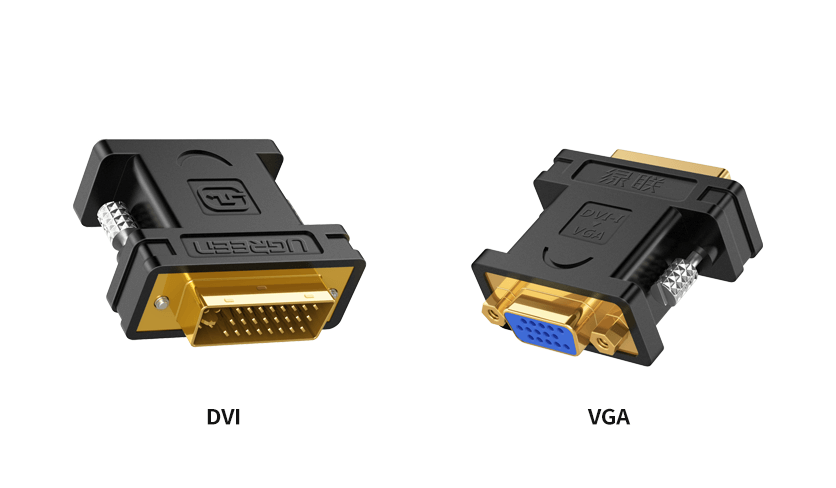 You can connect a DVI port to a VGA port by using an adapter.  Still, if the video source is digital you are going to have the same decrease in quality as you would when converting HDMI. You should consider this when choosing your display.

The VGA port is very large due to the 15 pins and two large screws. Laptops need to conserve as much space as possible. That is why some companies produced a mini-VGA. This VGA is much smaller than the original.

Laptops like the iBook and the HP Mini featured mini-VGA ports. It is possible to connect a `mini-VGA to a VGA display through an adapter. This would be particularly useful for a retro computer hobbyist.

The Future of VGA

As discussed earlier, companies don’t feature VGA connections on modern devices. It is unlikely that VGA will see a resurgence in popularity. However, there are still a lot of older computers and monitors that have VGA ports. So, the VGA system isn’t completely obsolete.

A Complete Guide to VGA: What You Need to Know