HUAWEI’s launch event on July 29th hosted by Richard Yu was insightful as we got to finally see the unveiling of devices such as the highly anticipated P50 series and the Harmony OS 2 operating system. The event featured some highlights such as showcasing the powerful camera capabilities of the P50 series cameras and much more as we will find out below. 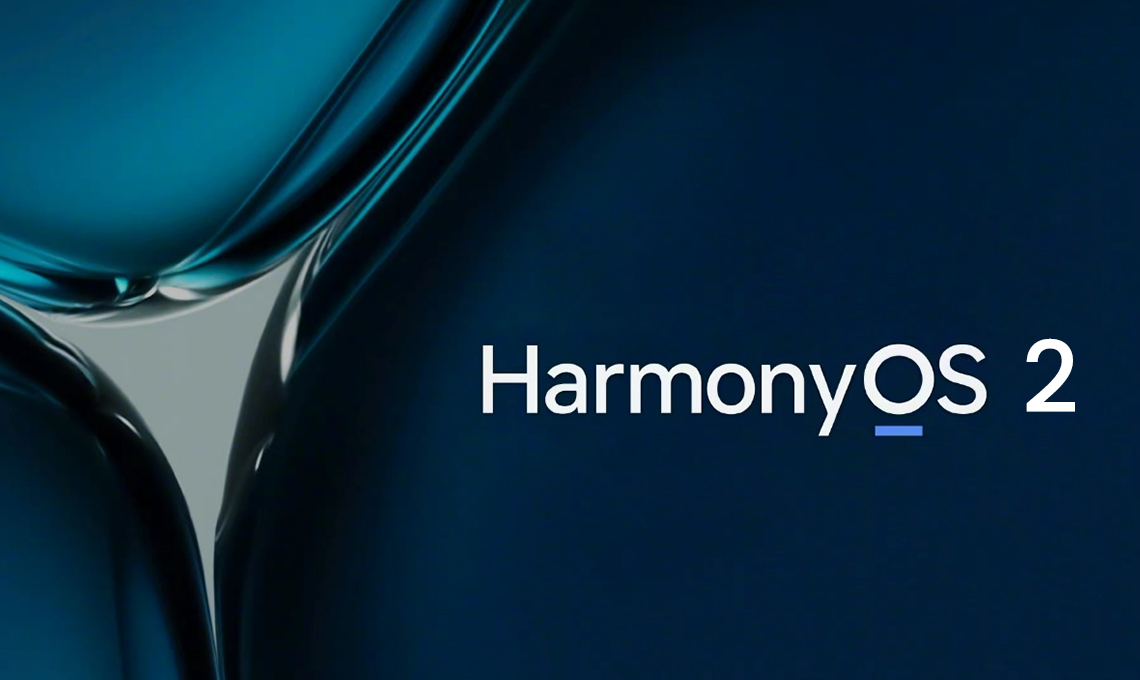 The P50 series will be the first major HUAWEI phone to launch with the Harmony OS 2. However, HUAWEI had some good news for their customers who own older models as they highlighted that next year it will be possible to upgrade all the legacy models to Harmony OS.

Below, we look at key features of the Harmony OS 2.

Service widgets in the Harmony OS 2 can be accessed by swiping from the lower left or right of the screen. This leads you to the service center screen where you will find all your widgets stored. This includes the clock, weather widget, fitness, etc.

The main advantage of these widgets is allowing users to see key information with ease. The widgets can be added to the home screen with a simple tap. Widgets are available in various sizes:

From the first look, you can tell that the control panel’s main focus is ensuring maximum accessibility and usability. The control panel is super interactive and is additionally divided into sections of different features. All of these make it the most interactive feature of the Harmony OS 2. 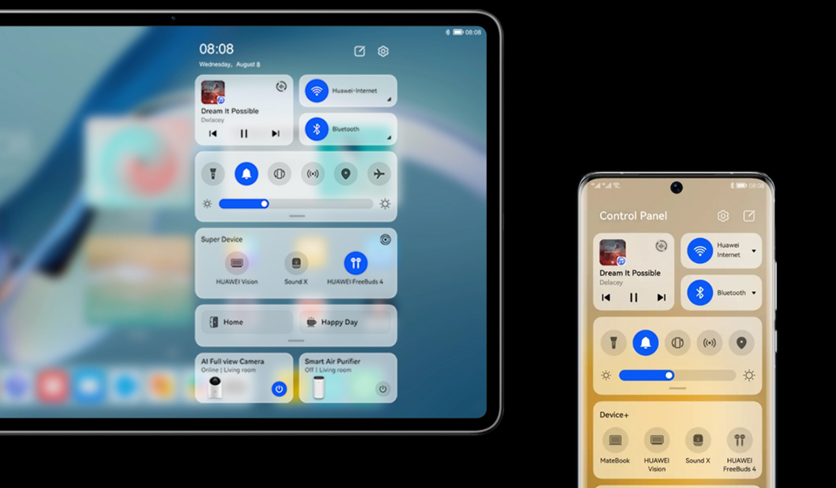 The feature displays trusted devices that are nearby and you can connect. A connection is established when you drag and drop the icon of the device to form a super device. This means that you can now control the device directly from the super device. For example, a super device connected to a TV can access the volume controller, Bluetooth, display settings, etc. Additionally, you can transfer audio and video playback to and from your device.

The Harmony OS 2 facilitates multi-screen collaboration and mirroring. A feature that allows you to pair the screens of compatible HUAWEI devices. This feature comes in handy for maximum productivity when working.

All You Need To Know About the P50 Flagship

After many months of anticipation, HUAWEI finally unveiled their new line of flagship phones, the HUAWEI P50 series. The event mainly showcased two main handsets, HUAWEI P50, and P50 pro. Also,  Richard Yu confirmed that due to the sanctions and other reasons, the P50 applied both Kirin 9000 and Snapdragon 888 chipsets, and all the P50 series are 4G devices. The Chinese company has set the release of these devices on August 12 but thanks to the event we know what to expect in terms of specs like you will see below.

The HUAWEI P50 features a 6.5-inch OLED FHD+ screen that is broken up by the central camera cutout at the top edge. The screen’s resolution is 1228 x 2700 with a 90HZ refresh rate coupled with 300Hz touch input.

The HUAWEI P50 Pro on the other hand comes in with similar display specs except for its bigger 6.6-inch screen and higher refresh rate clocking at 120Hz. Also, the pro version’s screen curves at the edges.

Both models come with cameras housed in two large circles at the back. And moving further down to the edge, there features a USB-C port.

Both HUAWEI models weigh slightly less than your average iPhone with the standard version weighing 181g while the pro version weighs 195g. Lastly, HUAWEI confirmed that both models are IP68 resistant to water and dust.

HUAWEI has always excelled when it comes to advancement in its camera’s capabilities and the P50 series is no exception. The standard HUAWEI P50 has a triple camera setup consisting of a 50MP main, 13MP ultrawide camera, and a 12MP telephoto sensor with OIS stabilization. The periscope module supports 5x optical zoom and 50x digital zoom.

On the other hand, the front of both models features a 13MP ultrawide single camera which is relatively low res compared to the rear cameras but is more than you will need for clear selfies. 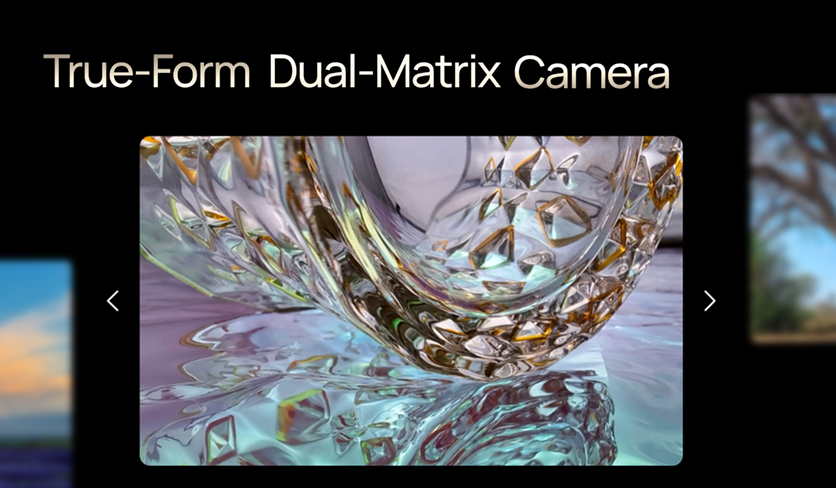 HUAWEI P50 Pro takes it up a notch in the camera game as it is equipped with a quad-camera setup consisting of a 50MP main, a 13MP wide-angle camera, a 40MP monochrome sensor, and a 64MP telephoto camera with OIS image stabilization. This periscope module facilitates a 3.5x optical zoom and a whopping 200x digital zoom.

As for the battery, the standard P50 comes equipped with a 4,100 mAH battery while the pro version features a 4,360 mAH battery. Both versions support the 66W fast wired charging the only difference being that the vanilla version lacks wireless charging support. Although the battery capacity of the P50 series models is relatively modest, HUAWEI has worked in ensuring their handsets consume less power thanks to the smart optimization by the Harmony OS.

Related article: How to Make Your Phone Charge Faster and Safer

Upon release, the P20 went for about $831 while both the P30 and P40 cost about €799. The P50 models fall within that price range differing due to the memory and storage specs.

HUAWEI Vision SE only came in a month after HUAWEI launched its smart screen V series back in March. The HUAWEI Vision SE comes in two sizes, 55-inch and 65-inch. Size is where they differ as they both come with the same set of features.

Unlike most smart TVs in the market, HUAWEI smart screen SE is powered by a HiSilicon Honghu SoC coupled with 16GB internal storage and 2GB of RAM. The SmartScreen sports a backlit  LCD panel with a 4K resolution that boasts 16.7 million colors, a 60Hz refresh rate, and a 92% DCI-P3 color gamut. The DCI-P3 color space makes this smart screen a great option for users who like their colours extra saturated.   Additionally, the SmartScreen presents a display with a 178 degrees viewing angle.

For the protection of your eyes, it is TÜV Rheinland certified for low blue light emission. The television joins an array of HUAWEI products that run the new Harmony OS 2 operating system. This means that it provides support for features such as HUAWEI share, HUAWEI Xiaoyi AI voice assistant, HUAWEI Hilink smart home controls, and even video calls through a magnetically detachable 13MP webcam, etc. 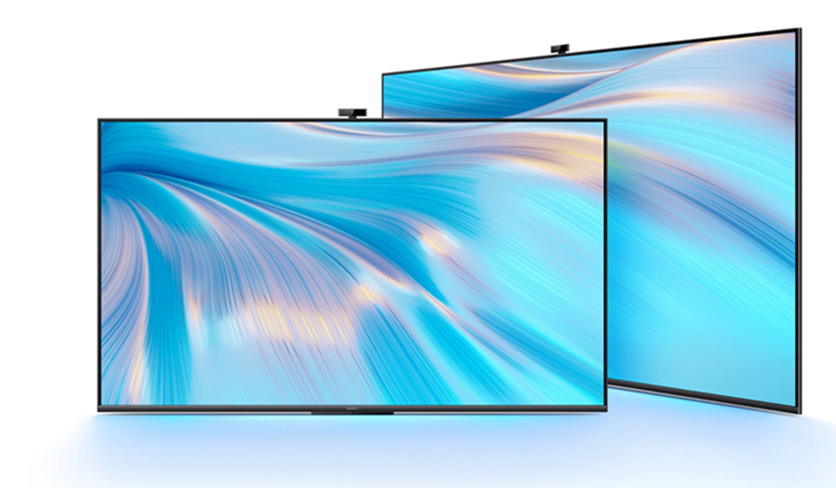 HUAWEI vision SE will retail for the following prices in china.

Back in the day, the HUAWEI watch was one of the best smartwatches that you could get on the market. However, after releasing the HUAWEI Watch 2 back in 2017 there wasn’t a follow up until recently with the release of HUAWEI Watch 3. The HUAWEI Watch 3 will retail for $486 which is a bigger price tag than its predecessors.

The Watch 3 and Watch 3 Pro feature a 1.4-inch, 466 x 466 resolution AMOLED screen. This screen has all the great features of an AMOLED screen making it noticeably sharply characterized with accurate colors.

This smartwatch comes with a rounded design with the standard version featuring a 46mm chassis while the pro version grows to a 48mm chassis. Both variants come inactive, classic, and elite editions.

The HUAWEI Watch 3 is the first smartwatch to run on the company’s own Harmony OS. The operating system works hand in hand with the dual-core processor and 2GB of RAM to provide a slick experience. Additionally, the watch comes with 16GB of storage.

You will also be getting a speaker and microphone on board, which comes in handy in making calls and interacting with HUAWEI’s Celia smart assistant. 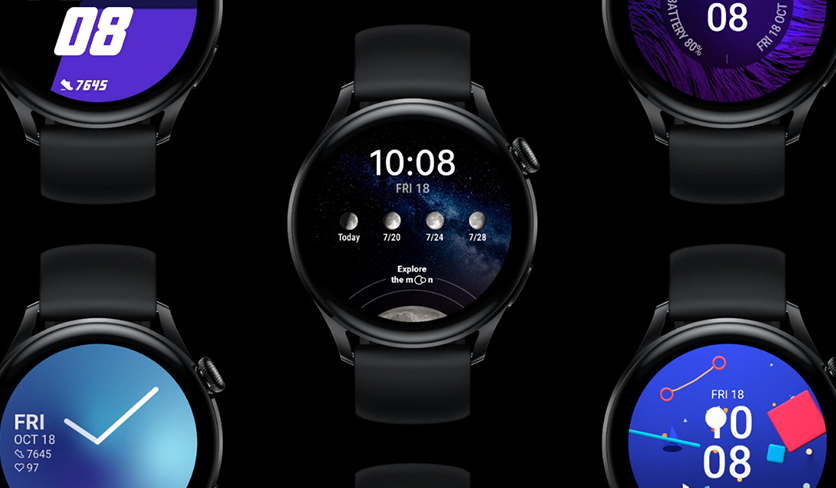 The Watch 3 offers an almost identical experience to HUAWEI Watch GT 2 series watches in terms of sport tracking modes. This is not a negative thing, as HUAWEI’s approach to sports tracking has always been generally positive.

However, there have been some new features such as a skin temperature sensor. HUAWEI has also added a fall detection mode and an emergency SOS mode.

A nice addition is reverse charging support meaning you can use compatible HUAWEI devices to power up your watch.

With some exciting features such as the P50 series powerful camera, showcasing of their new powerful Harmony OS 2 that facilitates unique capabilities such as the “super devices” feature, the event was insightful. That being said, the P50 series is expected to be available from August 12.

HUAWEI’s events are something to look forward to as they always aim to be pioneers of new technology. Make sure to subscribe to our blog to be up to date with the latest news and events.